After seeing high quality unique images of animals photographed using DSLR camera traps (trailcams), I became interested in the challenge of building one. The main components rquired are a DSLR camera, a sensor to activate the camera, cabling and electronic flashes. All components must be adequately shielded to protect from the weather.

The most challenging part of the project was to obtain a low cost and reliable trigger that would activate the camera when the animal entered the frame. Most camera triggers are based on passive infra-red motion detectors (PIR sensor) or beam sensors which use an invisible light beam to trigger the camera when the beam is interrupted. I  chose a beam sensor because they are virtually immune to false triggering and can be positioned so that the camera triggers when the animal appears at the desired location in the scene. The main disadvantage is that they are active devices which use considerable battery power and require two modules instead of one.

I am familiar with Nikon gear which is the reason for building a Nikon trailcam but most of the information here would apply equally to other camera brands.

My main interest is in nocturnal photography which is why this trailcam incorporates flash units. If you only want to capture animals during daylight you could make a simpler trailcam that does not require electronic flashes. You would probably set the camera to 'auto' exposure but you may wish to incorporate a circuit which deactivates the system during the hours of darkness.

The camera will be left outdoors for days or weeks at a time so I purchased a Nikon D70s from Ebay for approximately $100 as I didn't want a big financial hit if my main camera was stolen. The camera must be able to be triggered by an electrical cable which was the reason for choosing the D70s over the slightly older D70 model. I use a 50mm standard lens but great results are obtained with wide angle lenses also.

Commercially available break-beam sensors for wildlife photography are expensive so I decided to make one using a cheap consumer 'gate opener' and a few other low cost components. The gate opener consists of a transmitter and a receiver module shown below, which can operate over a distance of approximately 10 metres and costs less than $20. 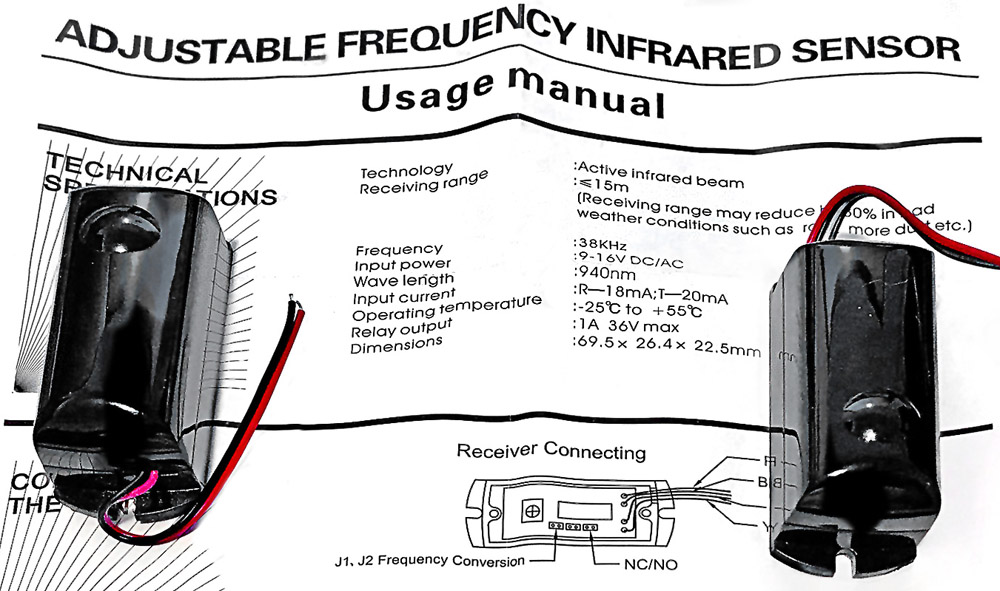 Two of these which cost a few dollars each, are required to increase the voltage from the lithium cells to power the IR transmitter and IR receiver units. The DC output voltage is adjusted to 10V using the potentiometer screw.

Suitable electronic  flash units must be capable of entering a low power standby mode when the system is inactive. They must also be able to be woken and fire when the IR beam is broken. The Nikon SB-800 is a high power flash that satisfies both requirements and can be  purchased for around $150 second hand. One unit is sufficient for good results but a second can be used to add fill light to the harsh shadows produced by a single flash. Each SB-800 requires four AA cells which will perform for several weeks on standby and during that time can produce several hundred exposures.

I have used 18650 Lithium ion cells with a typical cell capacity of 2500 milliamp hours. Seven of these cells, connected in parallel are used for each unit to power the transmitter and receiver modules for approximately 16 days. If desired, two rechargeable 12V 6,000 mAh batteries could be used instead.

Connect as shown below. Seven 18650 cells wired in parallel  (17,500 mAh) and the entire circuit is housed in an IP67 plastic box with a transparent lid to pass the IR beam.

The receiver assembly is a bit more complex but it is easy to build with moderate soldering skill.

Step 1. Modify the receiver PCB as shown below.

Step 2. Wire seven 18650 cells in parallel  (17500 mAh) and adjust the output of the boost converter to 10 volts before connecting the modified IR receiver.

Step 3. Wire the circuit below using two "4N26" opto-coupler IC's and 500 ohm 1/4watt resistors. Connect the white and green wires from the modified IR receiver.   Connect the focus, shutter and ground outputs to a Nikon MC-DC1 remote cord as shown below. WARNING! use a genuine Nikon plug which costs a considerable amount but it wont let you down. I originally used a cheap plug which failed and prevented me from obtaining images of a Spotted-tailed quoll.

Step 4. Place the finished unit inside a weather sealed housing. I used a IP67 plastic box with a transparent lid to pass the IR beam.

Attach one or two Nikon flash hot shoes to a Nikon camera hot shoe according to the wiring below. Use only three wires.  Test the connections by attaching the hot shoes to the camera and flash unit(s) and set the flash units to standby mode. Power on the camera and flash units, wait for the flash(es) to enter standby mode then fully depress the camera shutter release. The flash units should awaken and fire immediately on a single actuation of the shutter release button. If they do not fire there is a problem with the wiring or connections. 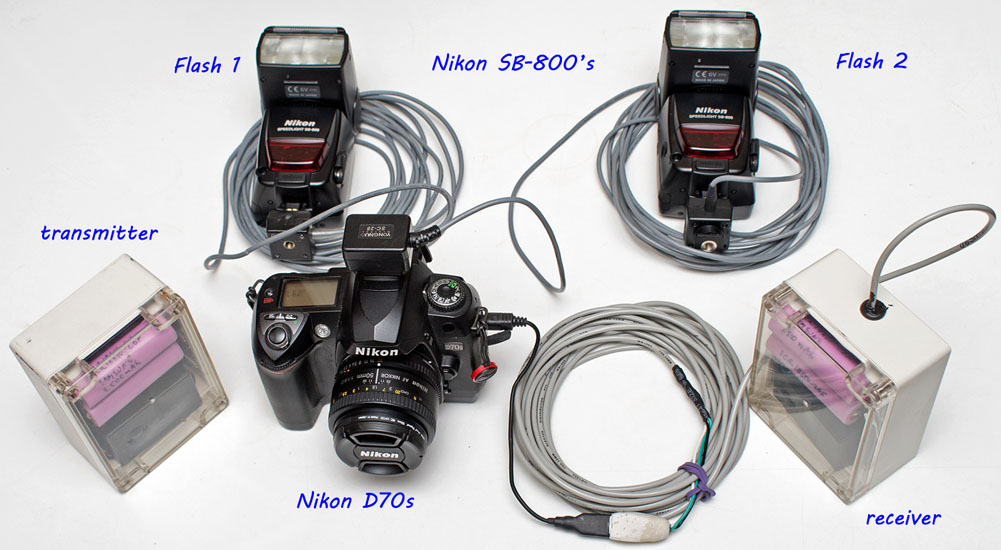 The IR trigger sensors , the camera, the flashes and cables must be weatherproof. The IR modules are housed in waterproof plastic boxes with transparent lids, the camera is housed in a pelican case with a 'siliconed' 90mm UV filter as the window and the flashes are mounted on poles and protected using 'ziplock' bags. 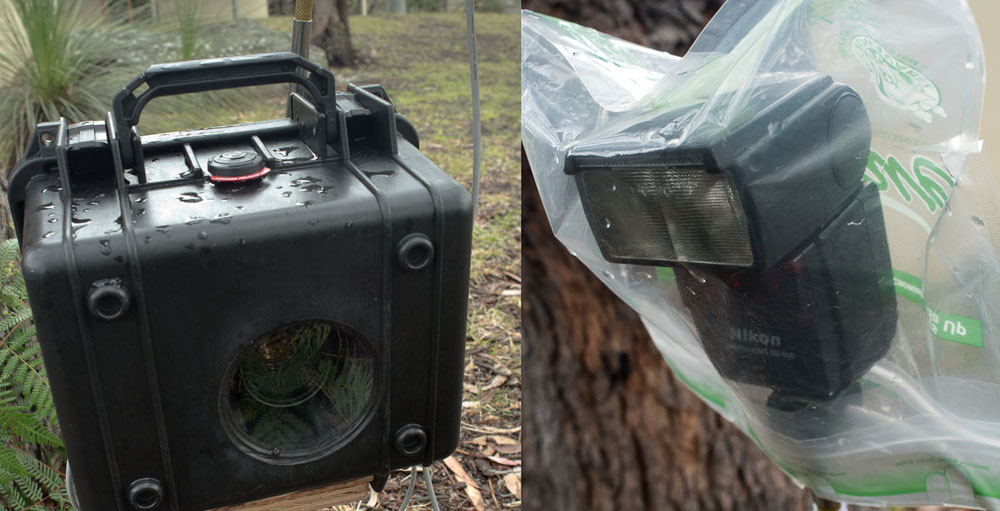 These photos of a Kookaburra, Brushtail possums, Red fox and young Swamp wallaby were taken in my backyard using a single flash unit. The camera was prefocused and food was positioned beneath the beam as an attractant. 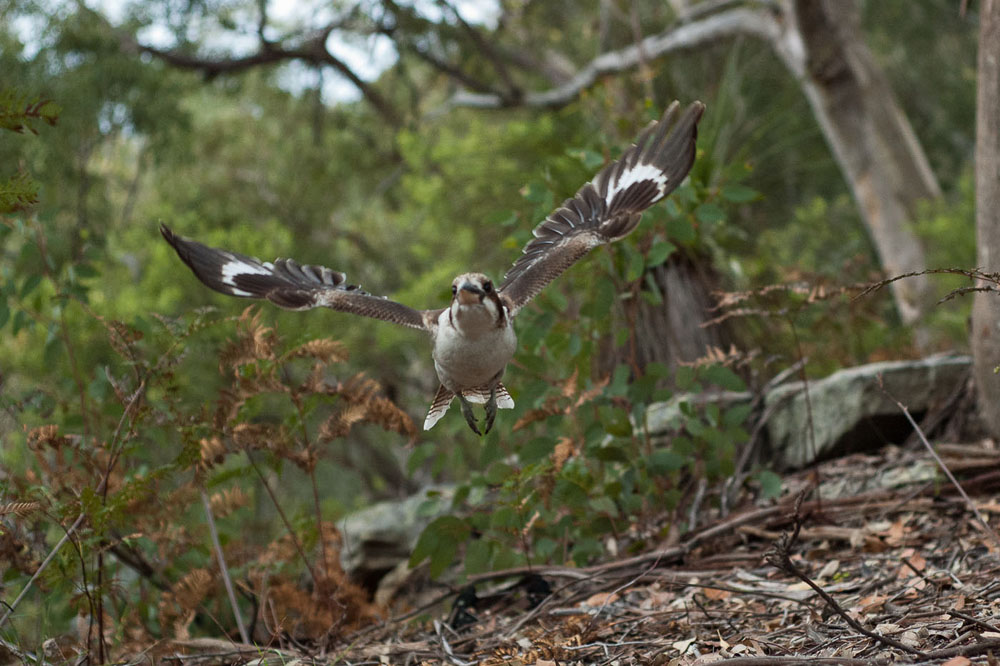 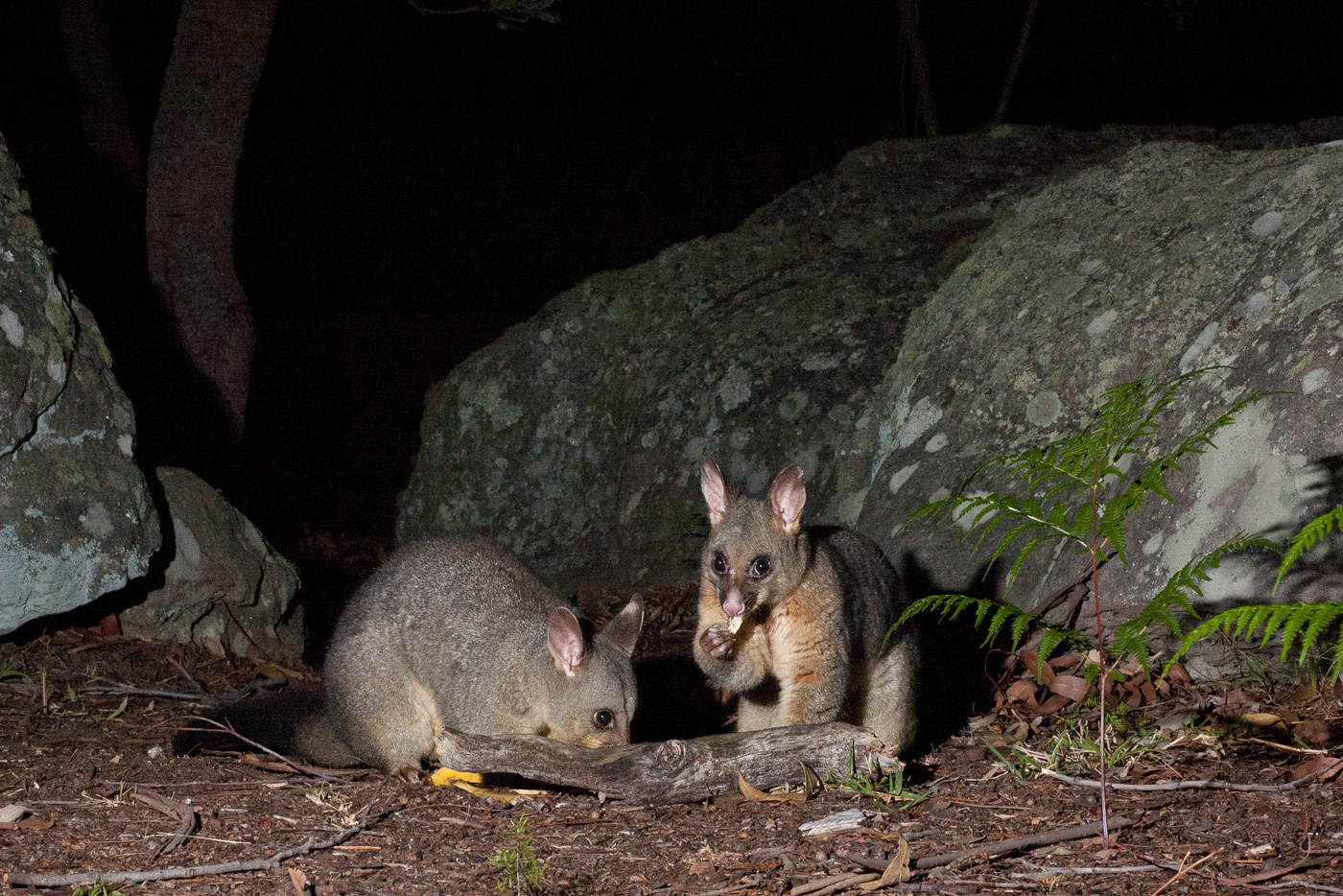 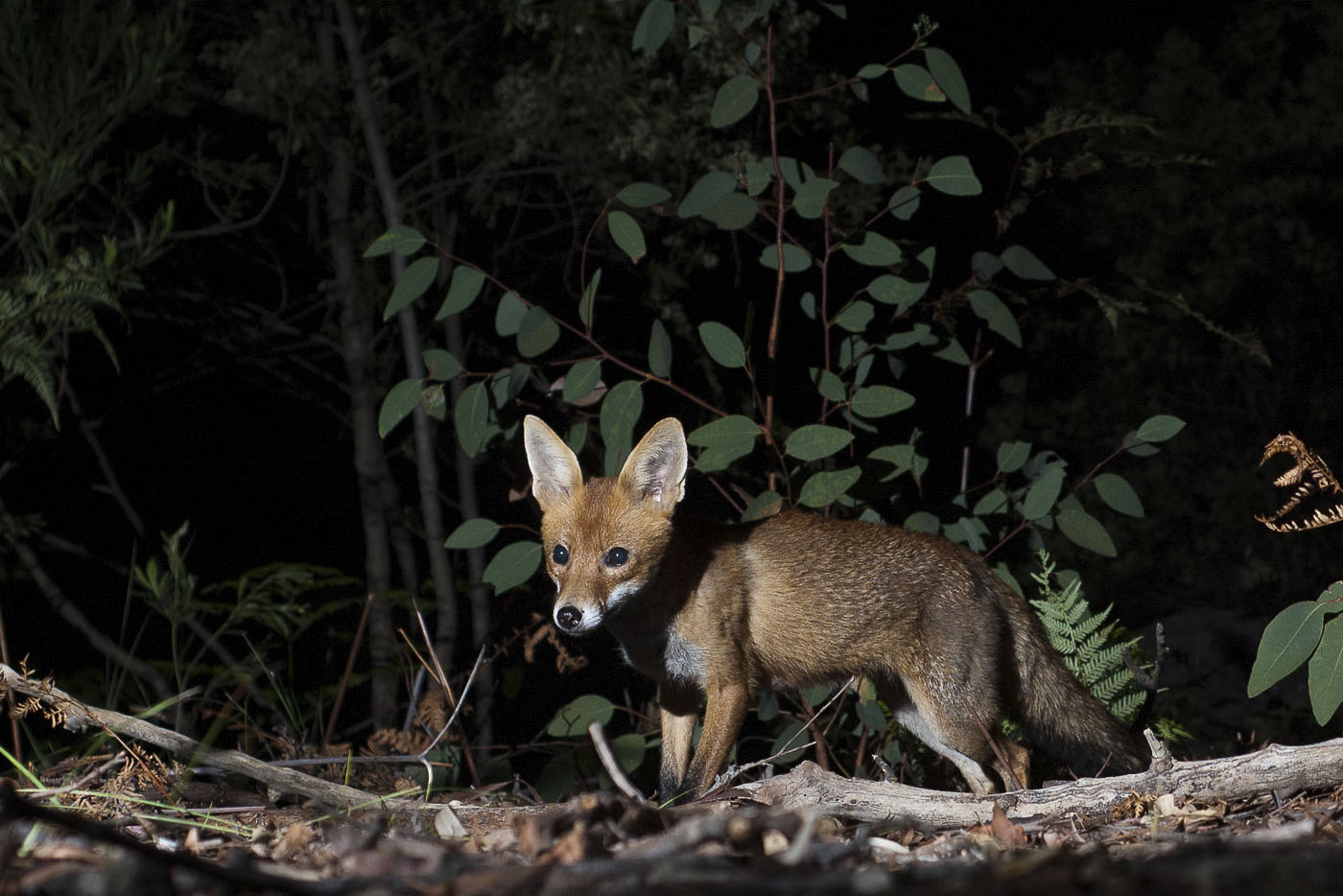 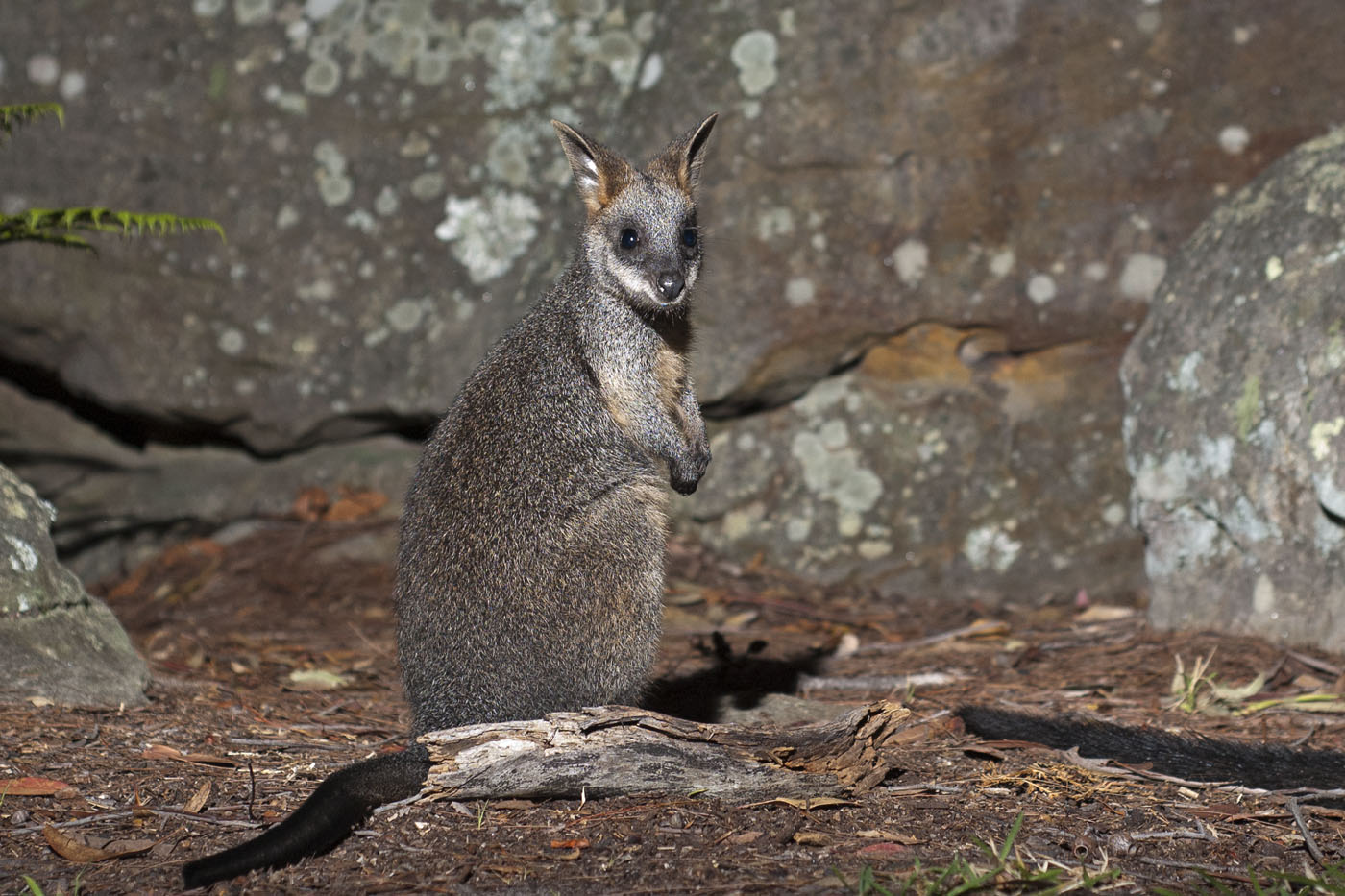